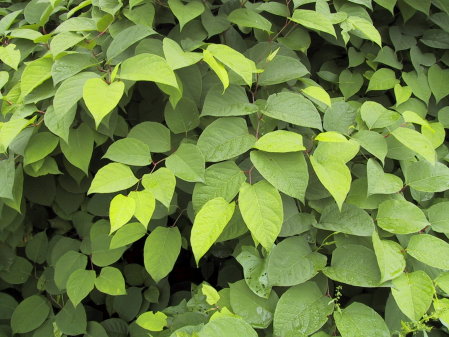 Japanese Knotweed
With 41,000 miles of waterways, and with more miles of road than any other Midwest state, Ohio is a cross-roads: for people, for commerce, for invasive species.The Ohio Invasive Plant Council (OIPC) has taken an active role in participating in efforts to address the threats if invasive species. One major effort has been to update the list of invasive plants in Ohio. OIPC is currently revising the list through the application of the Ohio Invasive Plant Assessment Protocol. Please see the OIPC Assessment Page for an explanation of this overall process. Also available on this site are the assessments completed to date, and the schedule of plants to be assessed.  A PDF of the invasive plant list is available HERE.

Just what does it mean to be an "invasive plant species"? Explore some different definitions HERE and decide for yourself.

Approximately 50,000 non-native plant and animal species have been introduced to the United States. At least half that number are plants, which can cause more than $34 billion a year in damage to the environment, forestry, agriculture, industry, recreation, and human health.

Rapid growth, high reproductive rates, lack of natural controls, and an ability to tolerate a wide range of environmental conditions have helped some non-natives outcompete and displace native species. Invasive species reduce biological diversity, change food webs, and displace wildlife. At least 42% of the federally endangered and threatened species in the United States are at risk because of invasive species.

The introduction of many non-native plant species was well-intentioned. Some had medicinal qualities, others were valued in horticulture, for forage, and for erosion control. Other species arrived by accident - stowaways in cargo and ballast. Potential for invasiveness was neither known nor considered. Human population growth, environmental alteration, and the vast increase in worldwide trade have created more opportunities for the introduction and spread of invasive species.

Of the approximately 3,000 plant species known to occur in the wild in Ohio, about 75% are native (present before the time of substantial European settlement - around 1750). Of the remaining 25% (more than 700 non-native plants), fewer than 100 are known to be problems in natural areas. The most invasive of these degrade Ohio's woodlands, wetlands, and prairies.

Some of the worst invasive plant species in Ohio's natural areas include:

To read more about this invasive plant, click on the image to open the Fact Sheet.
​Photo courtesy of Ohio Department of Natural Resources